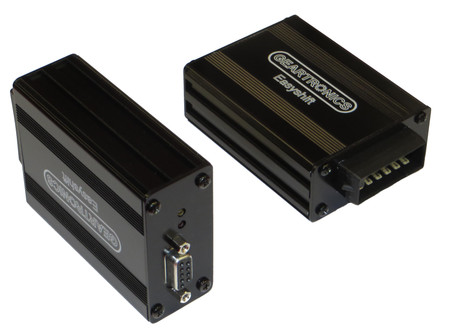 Unlike all other standalone flatshift systems, the Geartronics ECU operates our unique closed-loop strategy using feedback from the rotary barrel position sensor, thereby ensuring the fastest & smoothest shifts along with reduced gearbox wear.

Most aftermarket engine management systems incorporate a basic flatshift function, but this may only have provision for a pre-programmed cut duration. More expensive management systems may allow gear dependent shift cut durations, but this is still a significant compromise. The Geartronics 'Easyshift' ECU has the added sophistication of using fully closed-loop control of the engine torque reduction, therefore automatically adjusting the cut duration every time you change gear. This means that every shift is timed to perfection with the minimum interruption of torque to the wheels. There is also no possibility of resuming full engine power before the next gear has been fully engaged, leading to significantly reduced dog wear.

Please note that although this ECU is capable of driving a throttle blipper, we generally do not advise using throttle blippers or attempting clutchless downshifts with manual shift, especially with engines based on road-car production units or engines using forced induction.

The Geartronics Easyshift can be used either standalone or in conjunction with your engine ECU’s internal gear-cut strategy. It is particularly suitable for engines running on OEM management systems, or even carburettor engines without a management system. We do this by directly interrupting power to the ignition coils, although this is a rather crude method that we would wish to avoid if possible.
The ECU can accept all conventional trigger methods, including load cells or microswitches. The ECU is also unique in that it can utilise the barrel position sensor to provide the necessary trigger. By accurately measuring the position of the gearbox selector barrel, we can detect the initial few degrees of movement in order to determine when the driver is pulling the gear lever. This means that in some cases, it's not necessary to use external triggering devices, although load cell triggering is by far the best method.