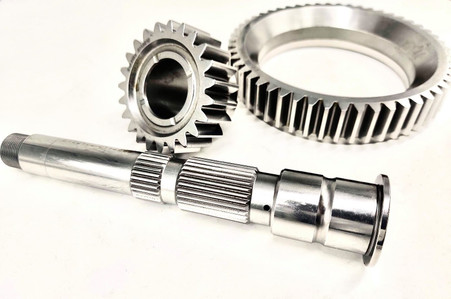 With the dramatic rise in popularity of AWD Honda K-Series conversions combined with the monumental figures that are now commonplace for K-Series motors, it is absolutely essential to ensure every element of the drivetrain is up to the task.

For that reason we developed our Exclusive Quaife Engineering Spur Gear Set and Pinion Shaft for CRV Transfer Cases. While these gear set increase the power handling capability of the K-Series Transfer Case via superior metallurgy, an even larger increase is seen due to the use of Spur Cut Gears. The OEM Helical gear design was engineered to minimise noise output while still providing adequate strength for the expected duties of a factory standard CRV. The tradeoff for this however, is thrust force, while in no way an issue at the levels of torque a factory K-Series can produce, with the figures now commonplace in the K-Series world it is a recipe for disaster. Converting to a Spur design massively reduces these forces and as such drastically increases the capability of the transfer case.

All of these components are manufactured to the same material specification as our record breaking gearboxes before being REM superfinished. This highly polished finish produces a smooth contact surface that not only allows for more even lubrication of the entire gear, but also reduces friction between meshing parts, thereby reducing heat and wear, in turn maximising longevity.